The Galician octopus is one of the flagship dishes of Galicia, Spain . It is usually served as a "tapa" or entrance. But it can also work as a principal if you feel like it. It is one of those recipes that you do not forget easily.

Its original name is polbo á feira (octopus a feira) and it is called that because it was originally a dish that was made in the days of the fair.

It is prepared with boiled potatoes, sweet or spicy paprika powder, sea salt and a lot of olive oil.

Its preparation is quite simple. You do not need any super skill for the Galician wing octopus to be worthy of a restaurant.

This is the main ingredient, obviously. Ideally, your trusted fishmonger will sell you a fresh octopus. The size will depend on how much you want to prepare.

A medium animal will give you 3 or 4 servings, and if you serve it as a tapa, it gives you much more.

Important fact, which I repeat in the recipe below, is that it is advisable to freeze the octopus and thaw it the night before preparing it, in this way the ice crystals help the animal's tissue break and cooking easier

A good octopus a feira should be made with Galician potatoes or as they are known: cachelos. In fact this recipe is usually called octopus with cachelos.

In the end, use the potato (or cachelo) that you have available.

This is another important ingredient. Try to use a good paprika with denomination of origin (I am a fan of De La Vera paprika). 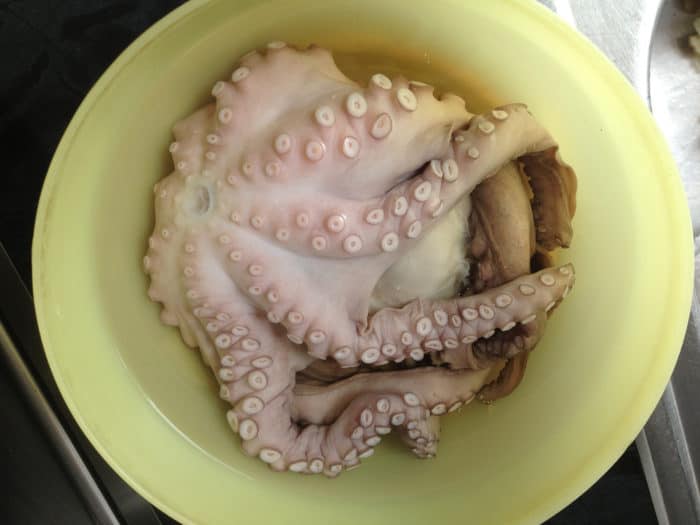 A important step you must do before preparing a Galician octopus is to store it in the freezer before preparing it, and take it out to thaw the previous night. With this, help the animal tissues break and soften to facilitate cooking.

Once defrosted and when it's time to prepare, fill a pot with water, add a medium onion, several bay leaves and a pinch of salt.

When the water starts to boil you will "scare" the octopus.

What is to scare the octopus?

It is a process that we will use so that the animal will not lose skin when it is cooking.

It's easy. Take the octopus by the head and introduce the tentacles in the water for a few seconds taking care not to burn your fingers, take it out, and repeat this process twice more (three in total). Finally you cook it in the pot for 30-40 minutes, depending on its size. 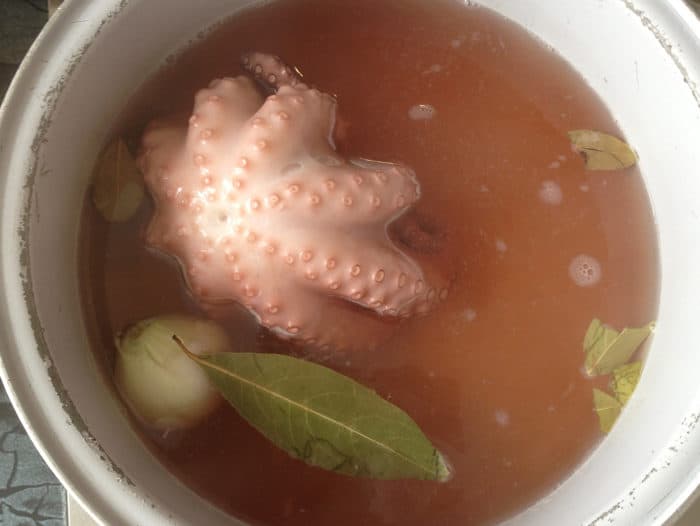 (Parallel to this procedure, peel and boil some potatoes in another pot and remove them when they are cooked.)

When the octopus is ready, take it out of the water, let it rest for a few minutes and cut it into slices with scissors.

Then, on a plate, or better a wooden board, Join the potatoes chopped into pieces and the octopus.Look at the size of the potatoes and octopus.

If you prefer, you can also watch this video explaining the whole process of cooking Galician octopus, including the process of "scare":

Here is the recipe in its printable version.

Learn to make step by step a delicious octopus with feira, one of the dishes most famous Galician and Spanish gastronomy in general.When they are cooked, remove them from the heat.

After you prepare this Galician octopus recipe, I'm interested in knowing how you're doing, write me in the comments or on twitter at @comederablog.

For dessert, you can eat delicious rice with milk 🙂

If you liked this delicious Galician recipe of the gastronomy of Spain and you are interested in more foods like this, where the protagonist is a delicious fruit of the sea, check our page: